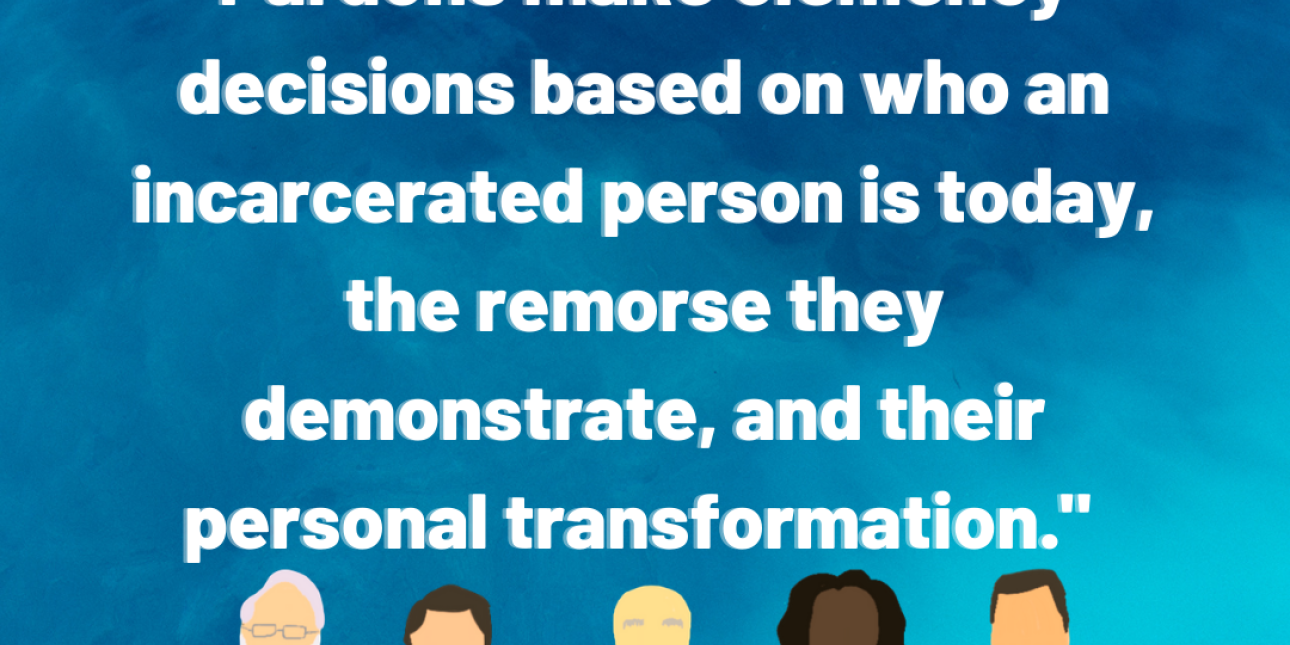 To Members of the Board of Pardons,

We are heartened by signs of progress towards restoring the historic role of the Board of Pardons as a mechanism for mercy and justice in our criminal legal system. At the September hearing, you recommended 40% of applicants for clemency, which was a powerful follow-up to the public hearings of September 2019 when 9 lifers were recommended for clemency. We also witnessed some concerning limits of the Board’s current approach and values towards recommending clemency when the Board denied a number of exemplary candidates their freedom. Rehabilitated people were not guaranteed mercy, justice, or in some cases even a fair evaluation.

We write today to demand that you adopt three critical guiding values to your process of recommending clemency in order to truly show mercy and provide justice.

To reduce the number of rehabilitated and often vulnerable people in prison, the Board must engage with the current realities of a candidate’s life and their journey. We have identified three shifts the Board must make to support this necessary redirection:

Value rehabilitation and the positive recommendation of the DOC: We demand that the Board of Pardons make clemency decisions based on who a person is today, the remorse they demonstrate, and their personal growth while in prison — not solely on the event that resulted in their conviction. Too frequently, factors like a person’s age, low likelihood of recidivism, their network of support or their accomplishments while inside are overlooked in favor of unchangeable factors like the details of their decades-old conviction. Department of Corrections staff can offer valuable insight in this area as they have spent significant time with applicants over the course of their incarceration, and their positive recommendations should be weighed heavily by the Board. When a person expresses remorse and demonstrates rehabilitation, clemency is warranted as their continued imprisonment is neither just nor necessary.

Affirm the dignity of all parties and end victim opposition bias: The Board should center the question of commutation firmly around the incarcerated person’s rehabilitation. Family members of victims deserve a safe place to express themselves. However, we also believe that the Board currently misuses victim testimony and in some cases allows for valid and emotional accounts of impact to block an applicant’s release from prison. Tying commutation decisions so definitively to victim opposition statements creates a system in which personal transformation and mercy are pitted against a victim’s pain. Arbitrary variables like whether a family is able to be located by the Office of the Victim Advocate, or whether they choose to provide a statement or how eloquently they provide their statement influence outcomes. The question of whether someone is rehabilitated is necessarily separate from a question of a victim’s pain and impact. Both these questions deserve to be taken seriously, and the commutations process is designed to answer the former. If people are rehabilitated and are not a public safety risk, the Board must reunite them with their families and communities even in the presence of an opposition statement from the victim’s family.

Free the innocent: In some extraordinary cases people applying for commutation have highly credible innocence claims that, due to the constraints of Pennsylvania’s Post-Conviction Relief Act and the lack of new evidence, cannot get their case reopened. Especially in light of policies and courts that historically targeted Black and Brown people,the Board must take seriously individuals who have maintained their innocence and have credible claims of innocence in order to correct systemic injustice and free people who should not be imprisoned. Pennsylvania needs a justice system that sees its role as fostering rehabilitation, remorse and redemption. The Board of Pardons has an important role to play in shifting us away from perpetual punishment and the mass incarceration politics of the ‘tough on crime’ era which massively harmed Black, Brown and working class and poor white communities. In a moment when people are rising up to defend Black lives, we call on you to adopt these guiding principles to help us achieve mercy and justice in the commutations process.

Coalition to Abolish Death by Incarceration

Let’s Get Free: The Women and Trans Prisoner Defense Fund