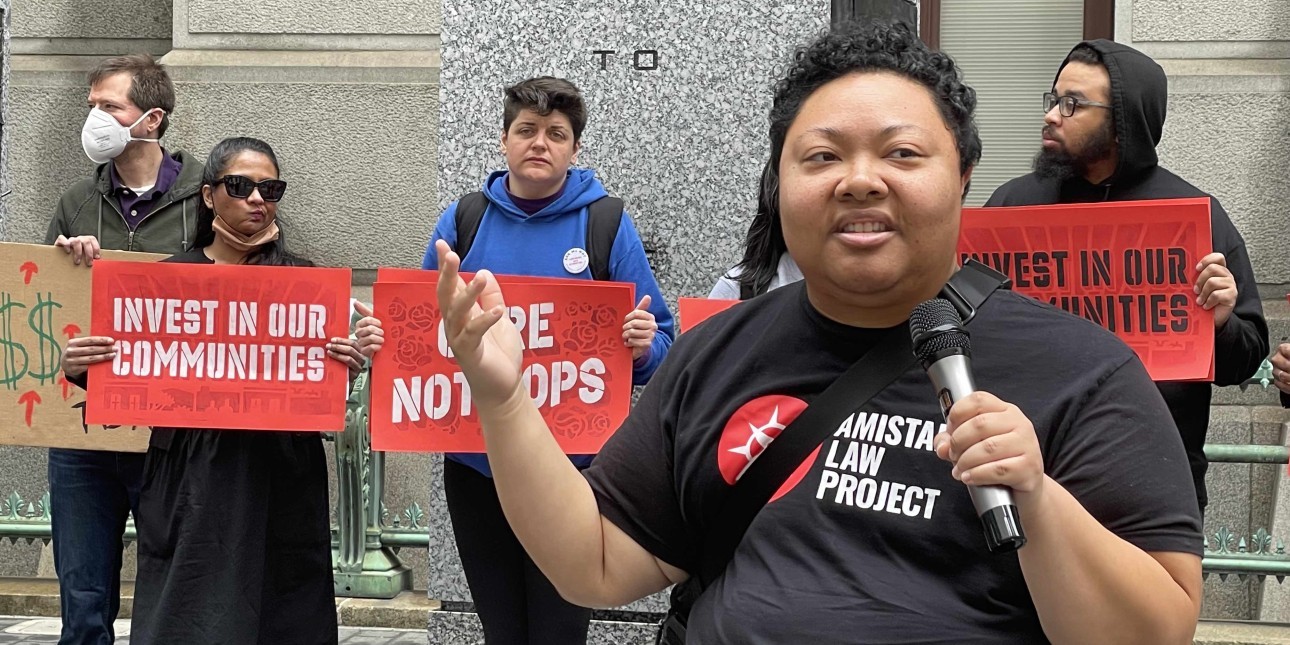 On March 15th, the Treatment Not Trauma Coalition held an action outside of the headquarters of the Department of Behavioral Health and Intellectual Disability Services calling for more funding to mobile crisis units. Philadelphians deserve a fully funded non police response to mental and behavioral health crises. In 2020 Walter Wallace Jr. was murdered by Philadelphia police officers while he was in the midst of a mental health crisis. Fully funded mobile crisis care could save lives and prevent a tragedy like this in the future.

Amistad Law Project, along with our movement partners, has been fighting for a people’s budget and for the interests of Philadelphians who need support most. We want a wealth tax that would bring in the revenue needed to fund an expansion of mobile crisis units, community based violence interruption programs and all the resources, such as well funded schools, that our communities need to thrive. The fight for these vital resources is nothing short of a fight for our lives.

On Thursday, June 16th at 10AM at the north entrance of City Hall, members of Amistad Law Project and Treatment Not Trauma Coalition, an alliance of social workers, mental health care advocates and racial justice and community organizations, took action. We released a colorful banner calling for more mobile crisis funding affixed to balloons. We took creative action to call attention to demands that have emerged from our communities, but are often ignored.

At the same time, Philadelphia City Council met and continued to push forward a budget that prioritizes tax cuts for businesses while purporting to help everyday Philadelphians.

Councilmembers Kendra Brooks, Helen Gym, and Jamie Gauthier took a principled stand against wage and business tax cuts that reduce revenue at a time when Philadelphia needs more resources. We applaud them and we look forward to a day that Councilmember Brooks's wealth tax proposal receives a vote. It’s that kind of visionary leadership that will help us win the resources we need to fully fund vital projects such as non police mobile crisis teams.

In 2021, the city allocated $7.2 million in funding to pilot an overhaul of the mobile crisis infrastructure and create a much larger and more comprehensive response that would be routed through 911. However, the Department of Behavioral Health and Intellectual Disability Services has rolled out the program slowly while the agency continues to also support the problematic police ‘co-responder’ program, which pairs law enforcement with a clinician. We want non-police mobile crisis teams to replace the co-responder program.

During this budget cycle we demanded and continue to demand that the city double its current commitment to mobile crisis team expansion to $20.8 million. We believe that mental health crisis response should be safe, timely, trauma-informed, and clinician-led. It must be resourced well enough to be available citywide 24/7.

The budget has been voted on and the final budget will likely pass next week but our fight continues. We expect a modest increase to mobile crisis funding in the final budget but a truly just budget would double this program so we can scale it up to ensure the next tragedy, the next killing of someone like Walter Wallace Jr., is prevented. A truly just budget would also tax the rich and ensure people across the city have what they need to not only survive, but thrive. Resourcing community based anti-violence programs, our schools and more isn’t just a talking point. It literally saves lives.

It is impossible to give businesses what they want and also make sure the poorest and most vulnerable Philadelphians have the care they need. We continue to call on City Council and the Mayor to be brave–tax the rich, cut the bloated Philadelphia Police Department budget and double mobile crisis unit funding. Billionaires, businesses, and universities must pay what they owe to our city.

Next year, Philadelphians will elect our next mayor and our next City Council. That election will be an important moment to press on all candidates for commitments to our collective vision of a just Philadelphia. Individually, we can vote in the candidates we believe will do the best job but together we can reframe the entire conversation about what our city should look like. Together we can win the future.