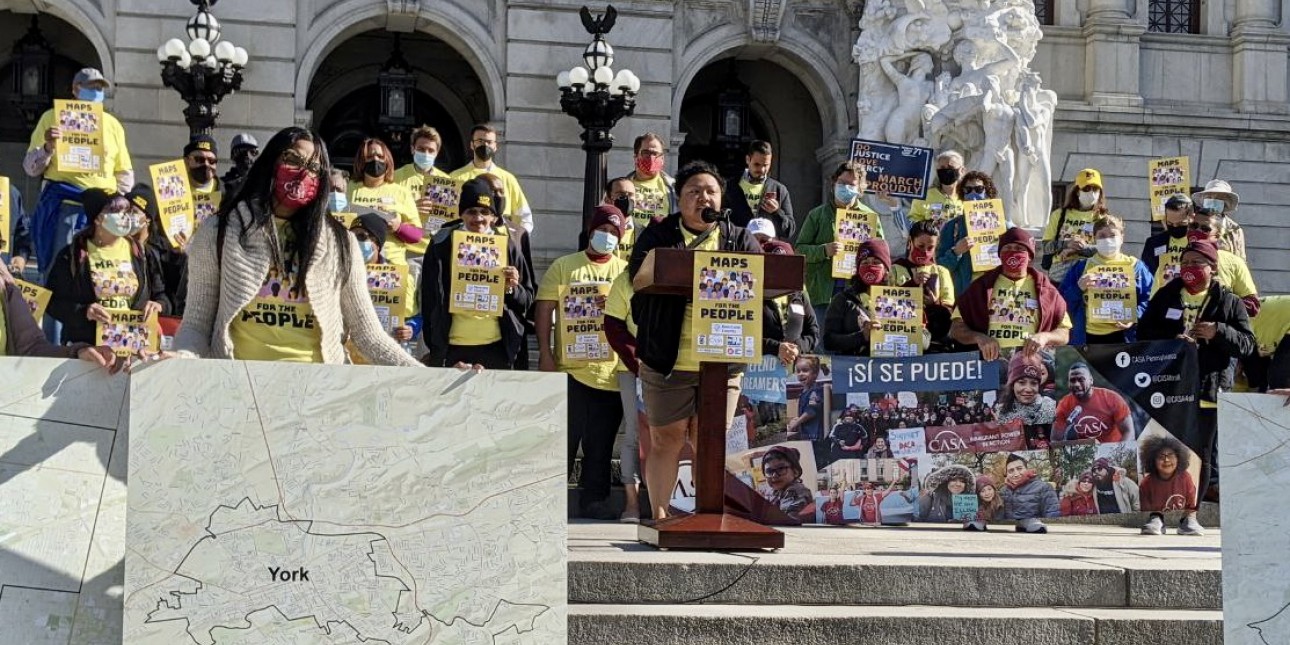 The Legislative Reapportionment Commission (LRC) released the first iteration of their redrawn political maps Thursday of this week. Every ten years, the LRC–made up of Democrat and Republican State Congressional leadership and a fifth nonpartisan member–redraws Pennsylvania’s political maps which determine both state house and state senate district lines. This is a critical process that determines who we get to vote for to represent us in the PA state legislature. You can look at the new maps here.

This year, Amistad Law Project joined Pennsylvania Voice, a partnership of over 30 organizations across the state working together to expand power for communities of color. PA Voice pushed for the LRC to hold more public hearings and to make these hearings as accessible as possible by publicizing them in advance, allowing for virtual participation and providing language interpretation.

PA Voice partners worked to collect over 700 maps from individuals across the commonwealth and to combine those individual maps into unity maps. As part of this process Amistad Law Project helped family members of people incarcerated in PA state prisons draw maps of their communities in North Philly, West Philly and Delco. At the end of October, PA Voice held a rally in Harrisburg announcing the unity maps where our Executive Director Kris Henderson spoke. In a powerful conclusion to the rally, we hand delivered the unity maps to members of the LRC and other state legislators. We took the vision from community members across Pennsylvania about how they should be represented directly to the decision makers.

This level of pressure and attention on the LRC this year is unprecedented.

The problem is huge. Currently, our state house and senate districts are gerrymandered. This inequity dilutes the power of Black and brown communities. More just districts could mean the passage of laws like parole eligibility for people serving death by incarceration sentences. Legislators of both parties can and do draw district lines to favor their party that make all of us less powerful.

It's critical that our communities keep participating in this process to advocate for any changes that must be made to the maps that ensure we are accurately represented and to put a stop to any attempts at gerrymandering that might happen as the process comes to a conclusion. This is where we need you.

The release of the LRC’s maps is a huge step in the redistricting process but it’s not the end of the process. Now that the LRC has proposed maps, there is a 30 day comment period for the public to respond to the maps. We are working to make sure as many people as possible see the maps and can give feedback on the maps. There will be attempts from people who want to skew the maps so that our communities are broken up and their political power is weakened.

Check out the maps here to see how you are represented under the proposed plan. And then help refine the process! Give feedback directly to the LRC about how you are represented. Are their changes that need to be made to their district? Let them know. Does your new proposed district look tight? Let them know and applaud them getting it right because we want to refute comments from people who might be trying to split up your district to dilute your power. Our voices matter in this process.

During this 30 day window, in addition to giving comments via the LRC website, you can sign up to give testimony at one of the hearings the LRC will hold. Sign up on the form below if you are interested in joining with us and giving testimony before the LRC.

Our current state legislature doesn’t reflect the interests of Black, brown, and working class people across the commonwealth. When we organize together and raise our voices we can change that.

Equitable districts that accurately represent our communities’ political power will pave the way forward in the fight for a Pennsylvania that works for all of us and one in which we can win a pathway home for people who have turned around their lives but remain trapped in PA prisons. Let's bring our elders, neighbors and family home and get our communities everything they need!