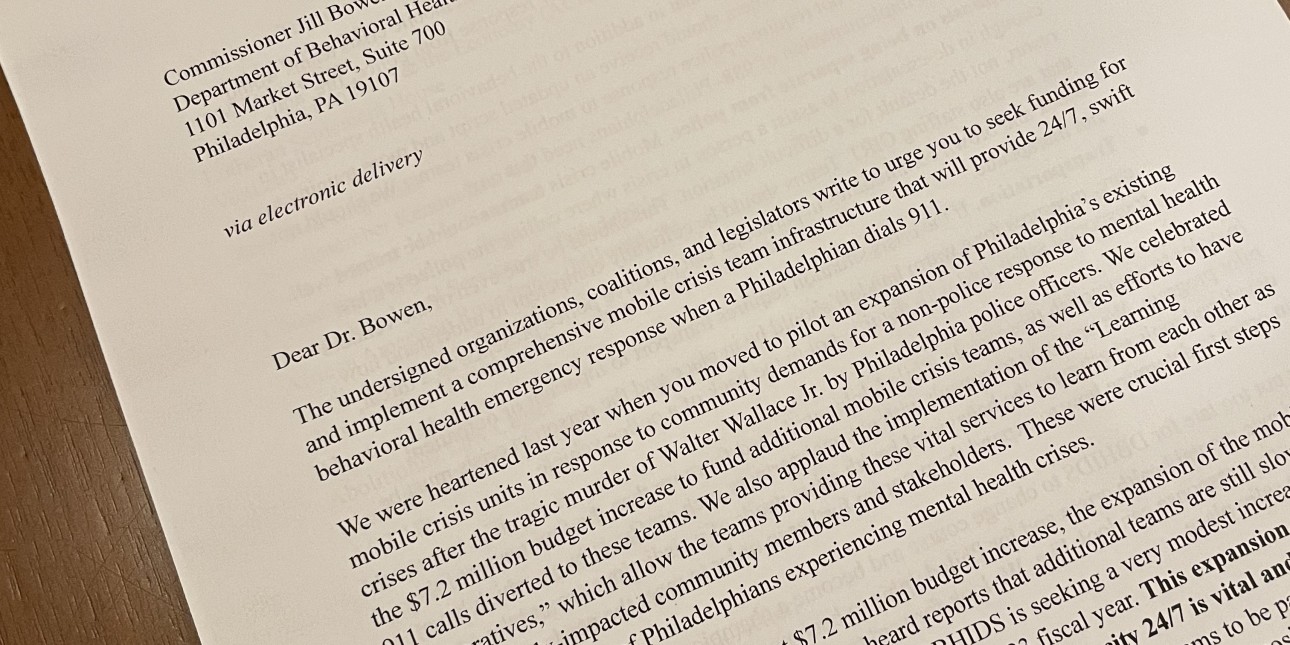 We deserve trauma informed services and alternatives to policing which so often harms and traumatizes members of our communities. In advance of our March 15th rally calling for citywide, round the clock non-police responses to mental health emergencies in Philadelphia, over 25 organizations and elected officials issued a letter calling on Commissioner Jill Bowen of Department of Behavioral Health and Intellectual disAbility Services.

Last summer Amistad Law Project and the Treatment Not Trauma coalition won a groundbreaking concession from the city–a 7.2 million dollar allocation to the Department of Behavioral Health and Intellectual disAbility Services (DBHIDS) for a mobile crisis team pilot program. However, this pilot program is limited to a handful of teams and does not operate 24/7 or in all areas of the city. City departments do not receive funding if they do not ask for it. Read the letter below where we call on Dr. Jill Bowen to ask for funding in this years city budget to fully expand mobile crisis teams so they are available for mental health emergencies in all parts of the city 24/7.

The undersigned organizations, coalitions, and legislators write to urge you to seek funding for and implement a comprehensive mobile crisis team infrastructure that will provide 24/7, swift behavioral health emergency response when a Philadelphian dials 911.

We were heartened last year when you moved to pilot an expansion of Philadelphia’s existing mobile crisis units in response to community demands for a non-police response to mental health crises after the tragic murder of Walter Wallace Jr. by Philadelphia police officers. We celebrated the $7.2 million budget increase to fund additional mobile crisis teams, as well as efforts to have 911 calls diverted to these teams. We also applaud the implementation of the “Learning Collaboratives,” which allow the teams providing these vital services to learn from each other as well as directly-impacted community members and stakeholders.  These were crucial first steps to serving the needs of Philadelphians experiencing mental health crises.

Even though DBHIDS received that $7.2 million budget increase, the expansion of the mobile crisis units has not yet happened. We have heard reports that additional teams are still slowly being staffed and trained. We also learned that DBHIDS is seeking a very modest increase in funding for the mobile crisis units expansion for the 2023 fiscal year. This expansion, and further, a fully funded program that will operate across the city 24/7 is vital and needs additional funding. We believe that increased funding would allow teams to be paid higher salaries so that these jobs are competitive and sustainable, and would lead to positions being filled faster.

While the mobile crisis units expansion is languishing, Crisis Intervention Response Teams, or CIRT continues to move forward. We know that non-police responders do a better job of handling mental health crises than do police or teams of police and mental health professionals, and is the preferred standard of care. We need DBHIDS to prioritize mobile crisis expansion and ask for the funding to adequately provide this resource to Philadelphians.

At a minimum, mobile crisis expansion should include the following:

In order to accomplish those goals, Philadelphia will need far more than the four teams of the pilot program. We urge you to consult with national partners such as  Crisis Now, which have developed tools to estimate the behavioral health crisis needs of jurisdictions around the country, in order to determine how to expand the program further in order to meet the needs of our city.

It is not too late for DBHIDS to change course and become a champion for Philadelphians who experience mental health crises and for Philadelphia to become a national leader for what robust mobile crisis response can look like. We look forward to continued collaboration towards making our city a safer place.