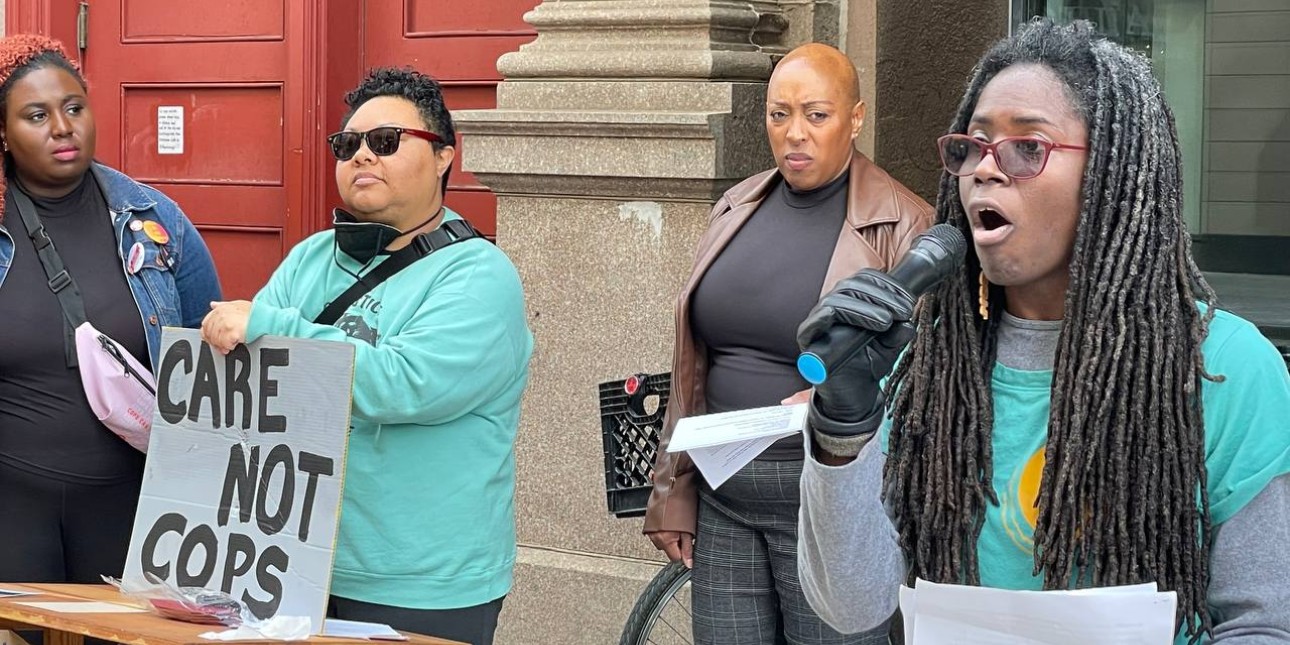 On Tuesday, March 15th around 75 people people took the sidewalk at 11th and Market to rally for non-police mobile crisis responses to mental health emergencies. Organized by Amistad Law Project and the Treatment Not Trauma Coalition people rallied in front of the headquarters of the Department of Health and Intellectual Dis(ability) Services backed by the Snacktime Brass band and musician Karen Smith, who helped keep spirits high. A number of speakers including mental health professionals, community organizers, Philadelphia City Council Members Kendra Brooks, Helen Gym, Jamie Gautier and PA State Representative Rick Krajewski helped make the issue clear and called on DBHIDS Commissioner Jill Bowen to ask for funding in this year’s city budget to fully expand mobile crisis response. We want it to be available in every neighborhood in the city 24/7. Earlier that day over 25 organizations and elected officials had delivered an open letter to Dr. Jill Bowen highlighting these demands.

“We believe that when someone is having a mental health crisis they should receive care not cops,” said Tonya Bah of Free The Ballot who helped to emcee the rally.

In the wake of the tragic police murder of Walter Wallace Jr., Amistad Law Project and Treatment Not Trauma came together to mobilize around the issue of non-police responses to mental health emergencies. In the 2021 budget, we were able to win a groundbreaking concession from the city–a 7.2 million dollar allocation to the Department of Behavioral Health and Intellectual Disability Services (DBHIDS) for a mobile crisis team expansion pilot program.

“Last year the city of Philadelphia allocated millions of dollars to expand mobile crisis units that are dispatched by 911 in response to mental health emergencies. This action came after passionate protest and activism in the wake of Walter Wallace Jr’s shooting by police in my district,” said Council Member Jamie Gauthier.

A mobile crisis team consists of a licensed mental health professional, a nurse, and a certified peer specialist, someone who has lived experience and can relate to families in crisis. Amistad Law Project and Treatment Not Trauma met with DBHIDS several times in 2021 to outline what we believed would make a successful non-police response to mental health crises. We believe that mobile crisis teams should, among other things:

While the pilot program held the promise that Philly would start providing these critical trauma informed services its roll out has been slow, limited and disappointing. A year later teams are not fully staffed and still being trained. With only a handful of teams mobile crisis does not cover the entire city and cannot operate 24/7. We were hopeful that by the next budget cycle, DBHIDS would be able to demonstrate that Philly had joined the ranks of similar successful programs in other jurisdictions around the country and ready to enter the next phase. Sadly, we learned that the Commissioner of DBHIDS, Dr. Jill Bowen, does not intend to ask for money in the budget this year to expand mobile crisis to grow the program. Simultaneously, a parallel program called Crisis Intervention Response Teams (also known as co-responders) which pairs an armed police officer with a social worker to respond to mental health emergencies, is up and running. We are left wondering if non-police mobile crisis response is being set up to fail.

However, the National Guidelines for Behavioral Health Crisis, published by the Substance Abuse and Mental Health Services Administration (SAMHSA), asserts that best practice for mental health crisis response is mobile crisis teams that respond without law enforcement accompaniment. What CIRT actually represents is a further entrenchment of law enforcement in a place that law enforcement has no business being in, for the sake of maintaining the status quo.

“We know that it’s possible for DBHIDS to roll out a successful program. Crisis Intervention Response Teams which involves the police, soft launched last Spring. This program is fully operational. So we demand that DBHIDS ask for money in this years budget so that non-police mobile crisis os fully expanded and covers the entire city 24/7. Cops can’t heal. The police who killed a young man in front of his mother can’t be trained and reformed…we need to reduce the interaction between police and vulnerable community members altogether. Cops have no business responding a health situation that could be handled by our communities if we were well resourced. Especially not mental health crises,” said Nikki Grant of Amistad Law Project.

“Were here one year later to say we’ve got more work to do”, said Council Member Helen Gym, and called for stakeholders to “prioritize these mobile crisis units and their expansion.”

Speaker after speaker reminded us that creating mobile crisis teams isn’t  some empty intellectual exercise or pet project, but something that could prevent real harm from happening. Annette Deigh, a member of Treatment Not Trauma and the President of Pennsylvania Society for Clinical Social Work read a statement by a woman named Liz who had a traumatic interaction with police when she was in mental health crisis and was arrested by them. “My husband didn’t want me to be arrested.  He wanted me to be well…Imagine that when my spouse called 911 he had been directed to another line and gotten connected to a social worker…the social worker could have told him about hospitals nearby and their intake process…No one should have to go through what happened to me.  I hope changes can and will be made in how mental health emergencies are handled. The mobile crisis program needs to grow so that when someone calls 911 in my situation, they actually get the help they need.”

People in crisis in our communities need a care response not a cop response. The urgent needs of our communities for robust, caring, trauma informed services require our city to do everything it needs to do to create a world class non-police response to mental health emergencies. Dr. Jill Bowen of DBHIDS must call on the city to provide more funding so the mobile crisis team program is available to all of our communities citywide 24/7. Everyday that goes by there are people in crisis and their families who are being harmed and traumatized through their interactions with police officers. We can and must eliminate those interactions wherever we can. Somewhere in the future there is a person named Liz who receives compassionate care instead of being thrown in the back of a police car. We are fighting for that future.

Please raise your voice with us. Call 215-685-5400 and leave a voicemail and email jill.bowen@phila.gov to demand that Dr. Bowen ask for mobile crisis teams to be fully funded in the city budget. 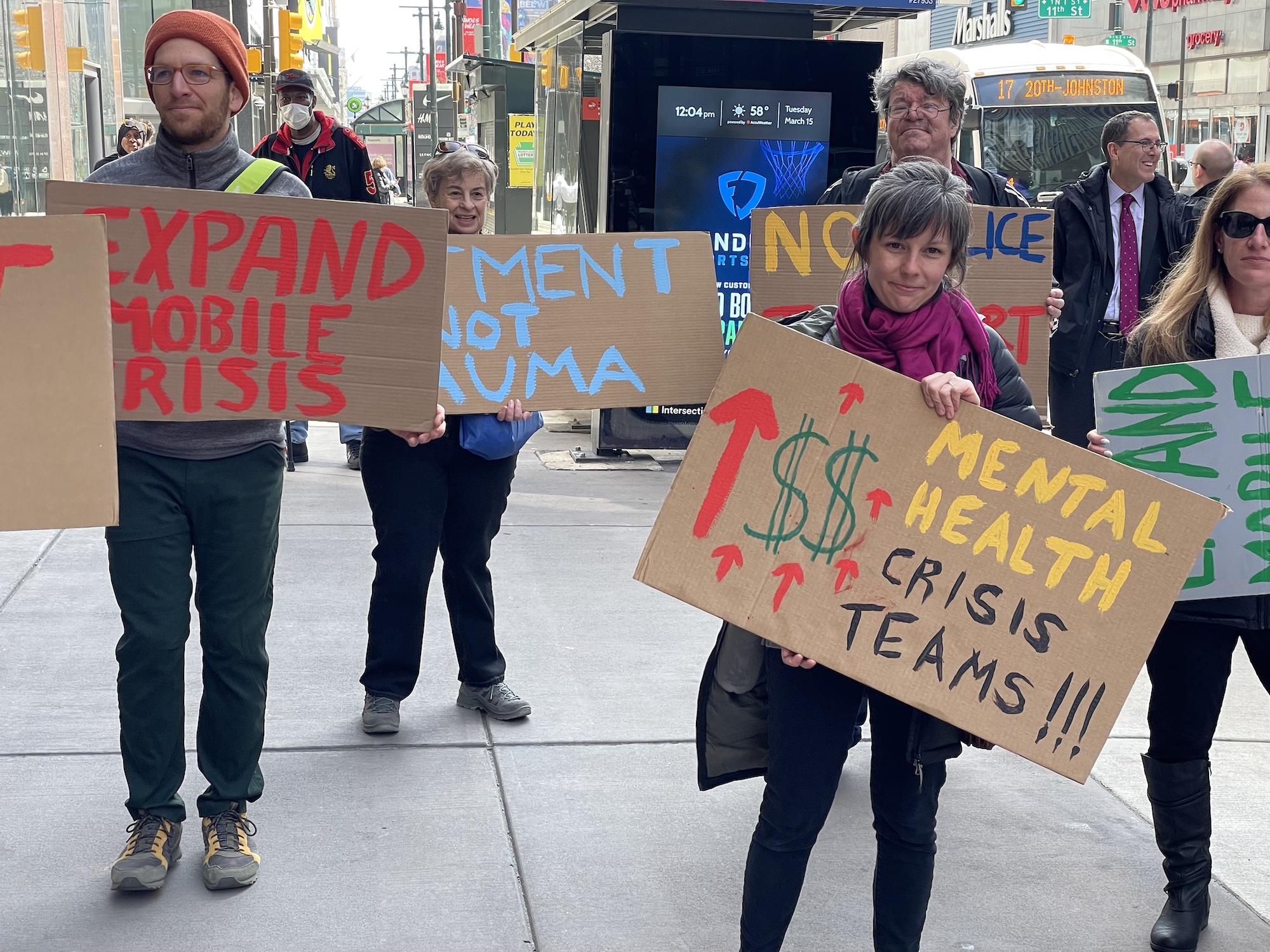 On Thursday, June 16th at 10AM at the north entrance of City Hall, the Treatment Not Trauma Coalition, an alliance of social workers, mental health...